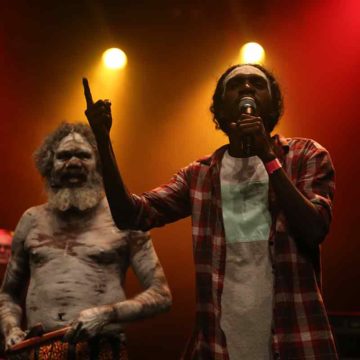 Sometimes a musical revolution can explode from the most unlikely of places, as ARIA Hall of Fame inductees Yothu Yindi have proven time and time again. Since bursting onto the scene in the late 1980s with their album Homeland Movement, Yothu Yindi – the pioneering band of blackfellas and whitefellas from far northern Australia – continues to break boundaries with their music.

With sounds stretching from tribal Yolngu beats and vocals to contemporary electronica and thumping rock ‘n’ roll, a political heart is beating throughout it all. Still touring tirelessly with original members and fresh talent from the next generation, audiences know Yothu Yindi for their legendary stage shows and for injecting new fire into classic songs.

Where it all started

Stalwarts of the Indigenous music scene in Australia, Yothu Yindi have toured the globe, winning fans across the US, Europe and the Pacific, and performing all across Australia in between, including with Midnight Oil, Paul Kelly, Neil Young and Santana. In 2012 they were inducted alongside the greats of Australian music into the ARIA Hall of Fame.

Where it’s at today

Today, in 2019, the classic band continues to evolve.

Despite losing Dr Yunupingu in 2013, the band carries his legacy proudly with talented new frontman Yirringa Yunupingu walking tall in his uncle’s footsteps.

Destined to be a Gumatj song man at an early age, Yirrnga grew up at a place called Beach camp Yirrkala North East Arnhem Land. The epicenter of traditional song and dance, a place steeped in ceremonial history, a place where manikay (songlines) , bungul (dance) and rom (law) are performed and passed down to the next generation within, the strict guidelines of kinship (gurrutu).

There is only small pool of people with the right lineage, voice, traditional knowledge and skills to take center stage at Yothu Yindi shows.

Yirrnga Yunupingu demonstrated his capacity as a front man singer. And it wasn’t long before elders chose this kid, with the big voice that would resonate into the future.

During his early years, the impact of Yothu Yindi, provided the younger generation an inspirational guidance and mentorship.

In the last couple of years alone, the band has played packed out shows at Sydney’s Enmore Theatre, Melbourne’s Hamer Hall, Byron Bay Blues fest’s Crossroads stage and the closing ceremony of the Commonwealth Games on the Gold Coast.

Proving the lasting power of Yothu Yindi, the band has recently released a new single, Mabo, which both critics and audiences have been praising for its infectious groove and political message.