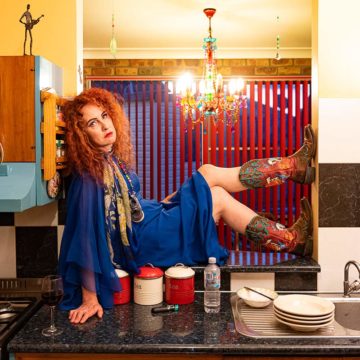 Wanita is more than a country singer, she is a country song! Raised on the Murray River in Yorta Yorta country, she began singing along to Loretta Lynn and Hank Williams cassettes long before she started school. Wanita always knew she was born to be a country star, and dreamed of performing at the Grand Ole Opry from the moment she learned to strum a guitar and press record.

Her music career has taken her to great heights including a tour of Sweden, and some lessor known dusty tracks as she juggled the demands of motherhood and autism. With three successful albums under her belt, Wanita finally realized her lifelong dream by recording an album in Nashville Tennessee.

I’m Wanita is a scorching and honest collection of self and friend penned songs, produced by US country legend Billy Yates and recorded in the Larry Beaird Studios.

The album has captured the dichotomy of Wanita’s life and torrid mood swings, her monumental stage presence, her exceptional vocal capacity, and her deep connection with traditional country music. She sings directly to the emotionally undernourished, the disenfranchised and the downtrodden.

I’m Wanita is set to be officially released early 2020, along with a feature length documentary about her life and music.