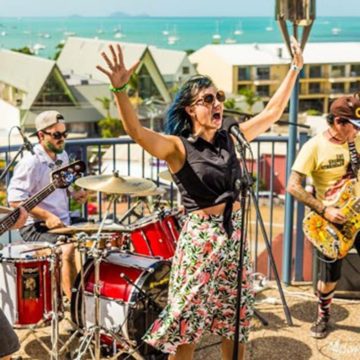 Viper Syndicate are a 4 piece punk rock experience emanating from Mackay,Queensland. Explosive on stage, the dynamic energy, humour, and musical freedom drive a live show that have been blowing crowds away for the last 10 + years. Viper Syndicate are Ryan Vella on guitar and vocals, he’s been with Viper Syndicate since the beginning, with his lack of boundaries allowing for tones and sounds rarely explored in modern music. Stacey Laree on lead vocals, brings a confidence and ability needed to captivate audiences. The stage is boundless where Stacey is concerned as she’s frequently known to explore the whole venue during the show giving every crowd a fresh and new experience every show. Kane Dodd on Bass and vocals, contributing fresh grooves and smooth vocals. Casey Mulcair on drums, a powerhouse of style and power, who has played with many other local bands over the years. With 3 E.P’s (A Venomous Bite, Audible Scratch and Semi-Automatic Beach Activity) and new material on the way Viper Syndicate are going full steam ahead with a constant goal of setting the bar higher this is achieved time and time again. Feature appearances at the Mackay Wine and Food Festival, Airlie Beach Festival of Music, supporting Blue Juice in Mackay and countless other venues throughout Queensland, they’ve honed their craft. On occasion Viper Syndicate has been known to team up with Aria award nominee Bill Chambers to seamlessly blend country and punk songs in unforgettable shows.