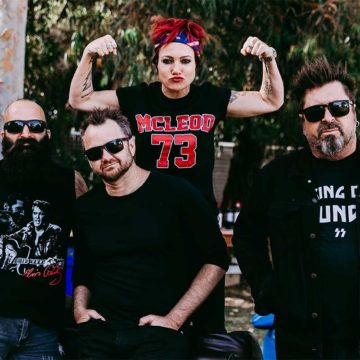 Hailing from Adelaide in 1996, The Superjesus burst on to the scene with a very unique sound. Coupling the sonic assault of a wall of guitars with Sarah McLeod's distinctive powerhouse vocals and catchy melodies, The Superjesus carved their own path both in Australia and around the world. Being the first band to sign a joint venture with Warner Brothers in the U.S and Australia, they divided their time evenly between the two countries. Ten years of relentless touring and 3 albums later, they decided to take some time off and pursue other projects. Recently reforming twenty years on from their platinum selling album Sumo hitting number two on the ARIA chart, The Superjesus are still as popular as ever.

Initially known as Hell's Kitchen, The Superjesus received national radio play with their debut 1996 EP Eight Step Rail Its feature track, 'Shut My Eyes' was heavily rotated by triple j earning the band an ARIA Award 1997 for Best New Talent. The Superjesus quickly became a festival favourite including the juggernaut of them all - which was Australia and NZ's Big Day Out throughout the '90s. Their second record Jet Age spawned the hits 'Gravity', 'Enough To Know', 'Secret Agent Man' and 'Second Sun' and achieved platinum selling status. Inducted into the South Australian Music Hall of Fame in 2017, The Superjesus have much to celebrate.

Reflecting on the life-changing record, front woman Sarah McLeod says "(When Sumo came out)...everything went nuts. It was terrifying and exciting all at once. We worked so hard on that album... To be sitting here talking about it 20 years later, knowing that it was an important part of Australian music history and affected so many people along the way...it feels like an incredible achievement. We had no blueprint of how we wanted to sound - of course we had our influences, but it was the combination of those influences that made us become The Superjesus."

Having just completed an epic 3 month national tour in celebration of the anniversary of Sumo , the band are in red hot form, rocking everybody senseless, one show at a time. The tour received glowing reviews from both fans and the press as the band tore around the country performing over 2.5 hours every night. Rolling straight on to perform with You Am I, Eskimo Joe and Hoodoo Gurus around the country for the summer of 2019 Under The Southern Stars Festival Tour.

The Superjesus - with its consolidated line-up of Stuart 'Ruddy' Rudd (Bass Guitar), Jason Slack (Lead Guitar), Travis Dragani (Drums) and Sarah McLeod (Vocals / Guitar) are re-energised and creatively inspired like never before, and keenly focussed on what comes next.