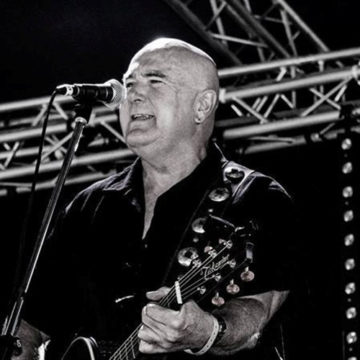 Kieran McCarthy is affectionately known around the Whitsundays as Mr. Airlie Beach. His music is iconic to the North Queensland township and relays his musings and revelations over his time of living in the area's paradise surroundings. Kieran is well known for his tongue-in-cheek lyrics and each album is peppered with country rock ballads that invoke the beauty and captivating scenery of his home town of 25 years. To read the lyrics alone as poetry would instil a sense of his deep love and appreciation for the region, and with the addition of bright and upbeat music accompaniment you have a unique sound that speaks to people from all walks of life.

Many of Kieran's ballads describe details of locations scattered around the region. From Blue Pearl Bay, and Whitsunday Shore to Wreaked Again; the discerning listener will easily visualise and appreciate Kieran’s account of his experiences immortalised in song. Look at the commentary of any of the recent social media mentions of Kieran McCarthy aka Mr. Monsoon, and you find a reverie of good times and fond memories. Many folks will “pop into Airlie to say a quick G’day to Kieran” at one of his local performances. He has been found spotlighting on the Airlie Beach Festival of Music main-stage with none other than Australian rock idol Shane Howard of Goanna in 2014, followed by a plethora of satellite events supporting the growing local festival.

The original singer songwriter has six albums to date with genres sliding between Aussie Rock, Country, Ballads, and even some hints of Comedy. Regular calls for titles such as Potential Derro, Chops @ 4, and Baby-What Happened, delight familiar listeners and new found fans alike. Title track Blue on Blue reached acclaim when it was used as the official soundtrack theme song of an Airlie Beach Festival of Music cover competition, and marked the birth of supporting competitions.

Budding original singer/songwriters from all over Australia subsequently showcased their skills by writing a song about the Whitsundays in an effigy style compliment to the man who inspired the competition and has helped to firmly establish the live music culture in the haven of Airlie Beach.