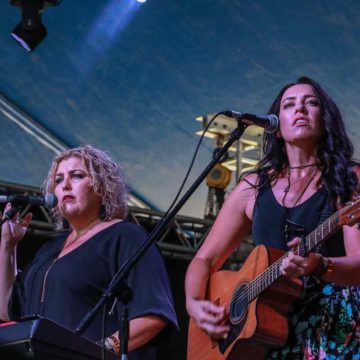 Singers. Songwriters. Sisters. With poetic lyrics, powerful vocals and perfect harmonies this duo is turning heads across Australia and abroad. They’ve graced stages at some of our most iconic festival including Tamworth CMF, Gympie Muster and the Birdsville Big Red Bash.

From Northern QLD at the Airlie Beach Festival of Music, down to the Latrobe Valley in Victoria for the Glenmaggie CMF, on the high seas onboard Cruisin’ Country and all the way to the Bluebird Café in Nashville, Tennessee USA. These girls are gaining attention for all the right reasons.

Raised in a large, musical family, on a cattle property in Central Queensland, these girls have been singing together since they could talk. They have been performing professionally together for over a decade with a live show that is a testament to their experience and dedication to great performance.

"There is something very special about their sound, reminiscent of the Dixie Chicks or Wilson Phillips, it must be a sister thing." - Rob Mackay | Pacific International Music

The right combination of sassy and sweet, warm tones and mesmerising sibling harmonies combined with their vibrant live performance will leave you wanting to hear more from INNOCENT EVE.