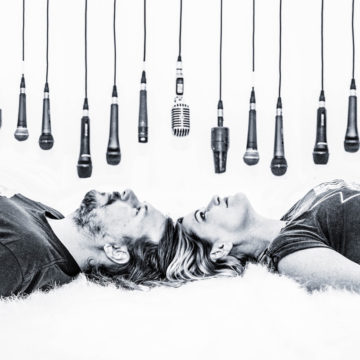 After wandering the earth for over a decade she finds him full of soul amongst a killer jam session. Natasha Hardiman and Patrick Gill are the back bone of the band Gypsy Soldiers, both based in Mackay they met all current members of the band at one of the many thriving jam sessions in the Mackay region.

Pat and Tash are big supporters of local original music scene in the region.

The Gypsy Soldiers fluctuate from a duo to a 6 piece band bringing together their own unique talents and authentic sound. Energetic, tight, heart thumping sound with theatrics to connect with every audience.

With a mixture of many different influences they find their sound is constantly changing. They love the classics.

They love to play covers putting their own twist on them and have many originals written from a collaboration of life experiences and nonsense. In 2017 the band recorded their first EP Paper dreams Songs written about alcohol dependency in a drinking culture. The lyrics capture real life in the pub scene and characters met along the way. Delivered to you in a style they call folked up alco rock.

The bands original music can be likened to Kings of Leon, Rolling Stones, Janis Joplin. Acoustic goodness on the first EP and they are now migrating to electric. Their music crosses over genres and generations with the audience being able to relate to the lyrics and music.

The Gypsy Soldiers were front and centre on the main stage at the Airlie Beach festival of music with a 7 piece band, sharing the stage with Shannon Noll, Sneaky Sound System, Kate Cebrano, Glen Mattlock from the Sex Pistols and Leo Sayer, They have supported other great talents such as Ross Wilson, and the Black Sorrows.Also in 2017 they played Winton outback festival as well as NQ Bikes, Bulls and Buggies, Mackay Beach Horse Races, Bowen Fishing Classic and many other events and parties around the Mackay region.

Patrick Gill shreds on guitar with melodic riffs and his rhythmic tones will set you on fire. A vocal range starting way down in his boots and finishing in a strong falsetto.

Natasha Hardiman on vocals sings with attitude and all her heart and soul she also plays guitar and percussion.