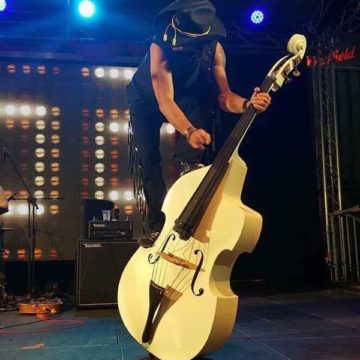 HOT entertainment is the name of the game for Rockabilly Stunt Masters, The Colt Seavers Band.

Colt Seavers Band are set for a huge future in the entertainment industry after wowing the crowds at Tamworth Country Music Festival 2017/18/19. With standing ovations, return crowds, 12 shows, signing autographs, photo opportunities, radio interviews with KIX COUNTRY, 106.9FM plus rave reviews all over their social media sites - you don't want to miss this train that is boarding. It’s going to be one hell of a ride.

With a background in film and television stunt work, nothing is off limits for the Frontman, including lighting up his arms or maybe even setting fire to the Drum kit.​

"We are a fun band, but serious about entertaining people,” Seavers said. “I think a lot of people have never seen a Double Bass before but, most of our crowd are very young and it's brought back the Bluegrass and Hillbilly music and we play anything - Countrybilly, Rockabilly and Bluesabilly".