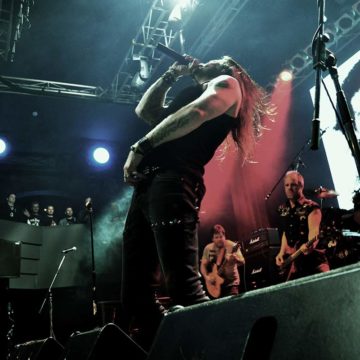 Bon But Not Forgotten

BON BUT NOT FORGOTTEN

Bon But Not Forgotten is the closest you will ever get to AC/DC in the 70's! This show brings together some of the world’s greatest rockers to pay tribute to the legend behind one of the world's greatest ever bands, AC/DC, and their iconic singer Bon Scott.

Featuring a knock-out line-up, including past members of AC/DC and other Aussie rock icons, The Angels and Wolfmother, this band knows how to electrify a crowd with its explosive repertoire of AC/DC's greatest hits.

Not content with just performing a 'Best Of' set, the band also focuses on some gems that aren't commercial in nature, but true fans will love to hear them live, some for the first time. As well as performing a few hits from the Back in Black Album which was on ode to Bon from the band.

The line-up features the consummate talents of:

Simon Wright – Joined AC/DC after the departure of Phil Rudd in 1983, Simon performed with AC/DC for 8 years and played at Donnington Monsters of Rock and Rock in Rio, 2 of the biggest festivals on earth. Simon was also drummer for DIO for many years up until his passing, as well as 70s rockers UFO.

James Morley – Former bassist with ARIA Hall of Fame band, The Angels, and guitarist with Choirboys, james has also performed with many iconic Australian artists including Richard Clapton and Angry Anderson.

Joel McDonald – lead guitarist and musical curator for Frankie’s World Famous House Band (of cult venue Frankie’s Pizza, Sydney) which has seduced collaborations with acts including KISS, Guns N Roses, Whitesnake, The Cult and more. Also Joel was a member of Rose Tattoo and performed internationally with the band.

Cynthia Gallie – Australia’s leading Female Rock Vocalist. There is not much to say, other than she has to be heard to be believed. Cynthia was asked to front the Let There Be Rock Orchestrated show which featured members of Judas Priest, AC/DC and Steve Balbi from Mi-Sex/Noiseworks.