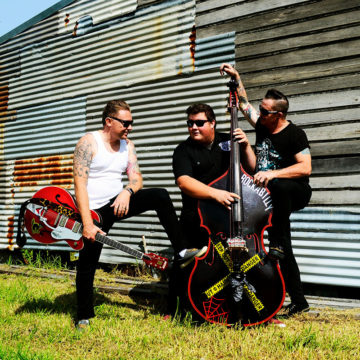 Hailing from Newcastle this 3-piece Rockabilly Band knows how to entertain!! Influenced by the timeless tunes of Gene Vincent, Eddie Cochran and The Stray Cats; Bad Luck Kitty bring Rockabilly to a whole new level, injecting cheeky lyrics into chunky ACDC like swing laced riffs. All delivered with mounds of energy and gusto that would make Mick Jagger shiver.

Previously known as “Adam and The Talent" (2010-2014), the 3 piece made a name for themselves performing classic RnR hits in almost every venue in the Hunter Region of NSW. After winning the Newcastle Passport to Airlie Band Competition, the band earned their way up to perform at the 2014 Airlie Beach Festival of Music. The word of Bad Luck Kitty's energy driven, interactive sets quickly spread around the festival filled town. Soon enough they were drawing huge crowds into the venues and cementing themselves in Airlie Beach Music Festival history coming second overall in the National competition.

November 2019 sees Bad Luck Kitty return to the picturesque Airlie Beach Festival of Music to dazzle the crowds once more. Early 2015 Bad Luck Kitty released their self-titled independent EP. Full of their original brand of hook driven Rockabilly tracks such as Real Rock n Rolla Girl and Hot Rockin Moma as well as pop-rock driven tracks such as Booty Call and Sunday Best this is surely going to be one to watch out for. Well known for their live performances Bad Luck Kitty always create a positive, energy driven environment around them. Whipping any audience into a state of pure delight and uncontrollable grooving. An extremely interactive band, you will often find the boys jamming in the audience or on the tables ... You never know what is going to happen at a Bad Luck Kitty Show...