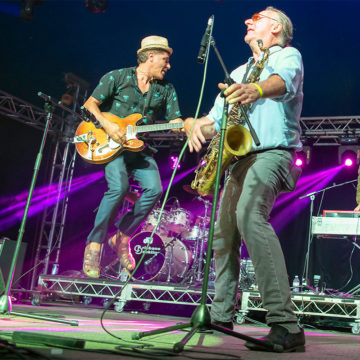 After spending the last two years performing around the globe, Bustamento have returned to our musical shores with a great collection of songs capturing the international flavour of their intrepid travels.

An exciting departure from the Carribbean based style of their ARIA-nominated first album (Intrepid Adventures to the Lost Riddim islands), the new release shows the band flexing its creative muscle.

Intercontinental Journal 7 catapults this musical mission on a round the world adventure of fun and games. Nicky Bomba’s comical personality shines through in this record and the mateship of these musicians, who have played together with Nicky in all of his performing bands (Bomba, Melbourne Ska Orchestra), is very tight.

As Nicky describes, "We have known each other for quite a while and we can travel on incredible tangents on the whiff of a musical seed.

"I have a great deal of love and respect for our sweet team and it was a pleasure to see us all fly and have fun."

Take two legends of Australian Rock & Roll who also just happen to be legends of television shows like In Melbourne Tonight, Underbellyand Hey Hey It’s Saturday, put them on stage with a hot band, and you have the recipe for superb, crowd pleasing entertainment!

Back doing what they do best, Frankie and Wilbur will have you dancing and singing along to the hit songs of OL 55’, the multi-platinum band that launched them onto Australian show business and into the hearts of Australian audiences.

Songs like Looking For An Echo, Diana, Eagle Rock, and of course On The Prowl, are presented in a energetic and hugely entertaining stage show that can best be described as “controlled mayhem”.

Frankie and Wilbur have enjoyed careers that have traversed the entire spectrum of show business: Film, television, stage, theatre and radio, but now they are returning to where it all began, live on stage playing great rock and roll.

With a career spanning over two decades, Clare O'Meara has toured extensively and recorded with many of Australia’s musical greats.

She has performed both nationally and internationally, including at major music festivals in Europe, USA, and Asia, as well as making TV appearances on the likes of The Voice, Australian Idol and more recently ABC’s The Recording Studio. Artists Clare has worked with include Slim Dusty, Lee Kernaghan, Troy Cassar-Daley, Phil and Tommy Emmanuel, Kate Ceberano, Joe Camilleri, Glenn Shorrock, James Blundell and countless others. She currently tours the country full time as a True Blue member of the legendary John Williamson’s band, and also the iconic Bushwackers.

In January 2018 at the Golden Guitar Awards in Tamworth, Clare received the prestigious Music Industry Award ‘Musician Of The Year’ - the first woman recipient in the history of this award.